We are so super excited to have had our very first meet up for the year in Lagos Nigeria. For those of us wondering, We just re-branded and now go by the name Lepsta Developers. We were formerly called “EngineOne Developers”.

Lepsta Developers is a community of developers who care about the Future of Software Development. We believe that the best way to predict the future is to create it, therefore Lepsta Developers is not just a learning environment but one where we encourage our members to create things that will influence the future of technology. We have a passion for technology and learning, and we believe there’s a little geek in all of us ;).

Lepsta Developers exists in 10 cities in Africa including Lagos, Johannesburg, Beria, Pretoria, Cape Town, Maputo, Nairobi, Eldoret, Luanda, Kaduna and 1 city in the US, Seattle. We have over 2000 members and each month we grow by about 5%.

Back To the Event

Building Scale-able Front end Apps was an event targeted at young developers who needed to enhance their skills in Front-end Development. It was held on the 11th of May 2019 at The Nest Innovation Technology Park Yaba Lagos.

Our speaker for the event was Ajala Abdulsamii, Co-founder of Fluid Angle and Full-stack JavaScript Developer who is very passionate about the growth of Developers and the quality of work they deliver.

The Future of Programming

The future of programming was a session taken by Chioma James. She explicitly talked about the “Why” and “What” the Lepsta Developers Community is about and our basic idea to transform not just Africa but the world.

She also encouraged developers to remain focused as programming can be difficult. In her own words, Trust your hustle, Collaborate, Network, Ask questions and so on… You can find the link to her slides here to get a full picture https://speakerdeck.com/chiomy0/the-future-of-programming.

Ajala Abdulsamii the speaker, started by giving a quick introduction of himself and why it is essential to build front-end apps that are scale-able. He also highlight steps on how the power to build a full blown app without necessarily having back-end developer skills.

He went further to talk about What makes an app scale-able?

Right after that, we got set up for the code-lab session which involves building a blog for Lepsta.

Click here to view his slides from the meet up.

Attendees that participated asked lots of questions and were mostly glued to their seats. Overall the event was eye opening as it met the expectations of the attendees.

To attend any of our meetups, you can visit https://www.meetup.com/Lepsta-Developers Lagos/ and don’t forget to say hi when you see me ;). 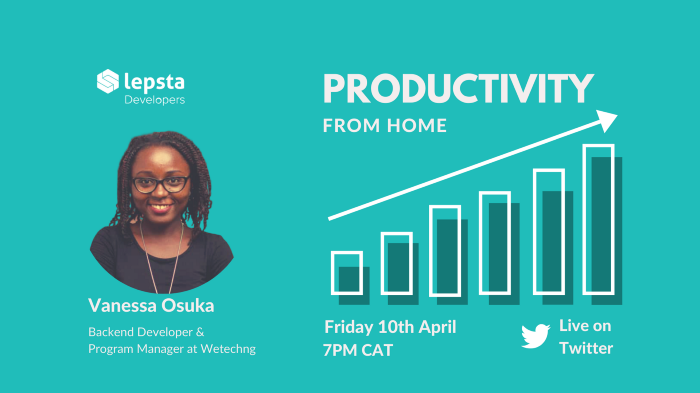 In light of the global response to curb the spread of COVID-19 most of us are encouraged to stay at home. Although some people are used to working from home, this does present a new reality for the majority of us.